Results and learnings from the dblp User Survey 2020/2021

From December 2020 to January 2021, we asked you to participate in an online survey in order to help us understand how researchers are using dblp, and how dblp and its features are perceived by the public. The response exceeded our expectations: We received the amazingly high number of 1046 responses to our survey in total, with 760 surveys fully answered and 286 surveys partially completed. This response provided us with a plethora of helpful remarks, constructive criticisms, novel ideas, and feature requests that will guide us in the development of dblp in the upcoming years. We would like to express our heartfelt gratitude for your kind support of dblp!

In this blog post, we will share with you the aggregate results of the user survey (with figures based only on the 760 completed surveys), and a summary of what we have learned from it so far.

So, who is using dblp?

We asked you about your professional background. Probably unsurprisingly, the vast majority (93.4%) of users come from an academic background. But we also have significantly large groups of users with a background in industry (14.5%) and education (20.9%).

How would you describe your professional background? (multiple answers possible)

dblp is around for more than 25 years now, and many veterans of the computer science community know about and are using it. In this regard, we were happy to learn that we still find many junior researchers among our users, as 43% of you reported that you consider yourself to still be in an early stage of your career. 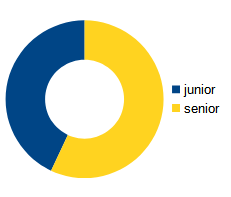 How would you best describe your professional seniority?

And since when have you been using our services? It turns out that almost half of you (48.7%) have been using dblp for more than 10 years! That’s an amazing figure, and we are grateful and happy for your continued trust in us. At the other extreme, we learned that only less than 5% of our users just started to work with dblp during the past year. 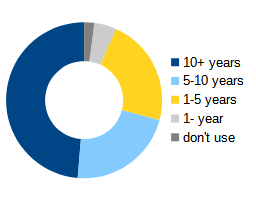 How long have you been using dblp?

How are people using dblp?

We already asked about your use cases with dblp in an earlier survey back in 2016. Based on that experience, we compiled a list of “standard” use cases and asked how often you are using dblp according to those standard use cases. The most frequent use case reported in the survey is the case of looking up a researcher’s bibliography in order to learn about their research output. More than 57% of all respondents stated that they are using this central feature of dblp at least once a week, while more than 85% stated that they are using it at least once a month.

In total, we found almost all listed use cases in regular use by around 70% of our users. The only true outliers were our open data APIs and the dump download options, which we found in regular use by only 24% to 30% of our users. We are well aware that these specialized features are only relevant to a smaller group of “power users”, so this number is not surprising. Nevertheless, survey comments from this group of users left no doubt that they greatly rely on the easy and open access to our data for its reuse.

In addition to the standard use cases above, the survey also yielded a number of further types of uses as free text responses. The most frequently reported further uses include (in no particular order) using dblp …

What are users thinking of dblp?

In the development of dblp and the curation of its data, we aim for a number of different goals. For instance, we seek to disambiguate homonymous authors and to cover all of the most relevant publication venues in computer science. That’s why we asked you for your assessment of whether or not we are successful at it. We were happy to learn that the vast majority of respondents fully agree or tend to agree that we are achieving these goals. We were particularly happy to learn that more than 96% of respondents agree or tend to agree that dblp meets the needs of the computer science research community. The aspect that is perceived most critically is our efforts to disambiguate homonymous authors. Here more than 12% of opinionated responses disagreed with the notion that we are successful at this.

Do you agree or disagree with the following statements?

We also asked our users to directly compare dblp with a number of other research information services. We asked them to give a simple assessment whether dblp or the other service is considered more useful, or both services are considered equally useful. Of course, it made us quite proud to learn that dblp was assessed favorably when compared with almost all other major services.

How do you rate dblp compared to these other research information tools?

However, one should keep in mind that, unlike dblp, those other services above cover all science disciplines and do not focus only on computer science.

How satisfied are users with dblp’s features?

The dblp website and our open data service are the main interfaces users work with. Hence, it is important for us to know whether you are satisfied with our current implementation, and where we need to improve. It turned out that, in general, the survey participants are quite satisfied. The one noticeable outlier here are the “references & citations” detail pages, as more than 24% of respondents are rather dissatisfied or very dissatisfied with our implementation. This dissatisfaction we can fully understand, as this feature is still a work in progress and the availability of open citation data is still limited.

Just as we had hoped, you had plenty to say when it came to suggestions for improving and expanding dblp. We compiled an internal list with literally dozens of your ideas for evaluation. Some of them have already been on our own to-do list, others were new and we are now seriously considering implementing a fair number of them. Frequent suggestions for improvements that we already had been considering or working on (some of which are actually quite close to a release by now) include:

Suggestions for new features which we would like to consider at some point in the future include:

There have also been some frequent suggestions which we will most likely not pick up anytime soon. These include:

What we’ve learned and what’s next

Here are some further key leanings from the user survey:

Opinions, thoughts, and views expressed as blog articles here belong solely to the respective author, and not necessarily to the author’s employer, organization, or any other group or individual.

A big change has just been made to the dblp website … and, in case we did our job right, you may even haven’t noticed yet: With the latest update, we introduced major changes to Read more…

In the past, we often discussed how helpful ORCIDs are for our work. An ORCID (Open Researcher and Contributor ID) is a unique personal identifier that scientists can attach to their work. The ORCID ensures Read more…

At the end of March 2020 dblp provides bibliographies for almost 2.5 million scientists. With this number, it is not surprising that we have namesakes – scientists with the exact same name. For historical reasons, Read more…